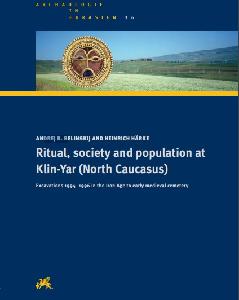 The present volume documents the results of one of the early joint projects between Russian and Western archaeologists. The cemetery of Klin-Yar, situated near Kislovodsk in the foothills of the North Caucasus, had already been excavated before 1993. 350 graves, mostly belonging to the Late Bronze Age and Early Iron Age Koban Culture, had been uncovered; another 70 graves belonged to the Sarmatian and the early medieval Alanic period. The field work of the Anglo-Russian team carried out between 1994 and 1996 brought to light another 52 graves, most of them Alanic. The original plan for DNA analysis could not be realized in the 1990 s but is due to be revived after the recent improvements in the extraction of ancient DNA. The results of the anthropological analysis suggest an immigration of both, the Sarmatian and the Alanic population with new male and female phenotypes as well. The modern Ossetians are considered to be the descendants of the Alans. Beside the main authors Andrej B. Belinskij and Heinrich Härke, a number of notable colleagues, anthropologists and archaeologists, have contributed to this volume and have shed light on widespread nomadic cultures like the Sarmatians and the Alans by a detailed analysis of the excavated cemeteries. We still need more of such well excavated and documented evidence for overarching perspectives and theories. The Caucasus is a region which deserves more attention in archaeology. It was always more of a bridge than a barrier between South and North, something which is apparent in finds from prehistoric and early historic graves from the cemetery, e.g. Iranian glass. Therefore we need more fieldwork in the region, and the present volume is an excellent advertisement for joint projects. The edition of the volume in our monograph series was already agreed in the 1990 s with Herman Parzinger. It is a pleasure for me that the publication of the book could be realized now. I am very grateful to Heinrich Härke and Erdmute Schultze for undertaking the onerous job of editing the manuscript.
Berlin, May 2018 Svend Hansen
Full publication as PDF