Ngwenya - the oldest mine in the world? drucken
Short video with spectacular views of Ngwenya to learn more about the 43,000 year old iron mine 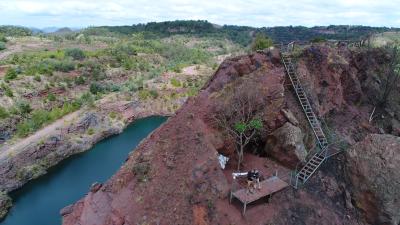 Eswatini, the former Swaziland is a nation state in Southern Africa. It is situated between today's South Africa and Mozambique. Since 2016, an international team has been working to preserve the archaeology of Eswatini, protect its cultural heritage and train students and young scientists.

Partners involved in this cooperation are the Eswatini National Trust Commission (ENTC) and the German Archaeological Institute (DAI) along with other international partners such as the Senckenberg Centre for Human Evolution and Palaeoenvironment,the University of Missouri and the DFG. Specifically, the work focuses on the archiving of archaeological finds in the National Museum, the documentation of sites throughout the country, and archaeological fieldwork at selected sites, such as the Lions Cavern in Ngwenya.