Print English edition of DAI Cairo's magazine "Archaeology in Egypt" now online!
The 2019 special issue on the diversity of the DAI's research in Egypt is now available in English. 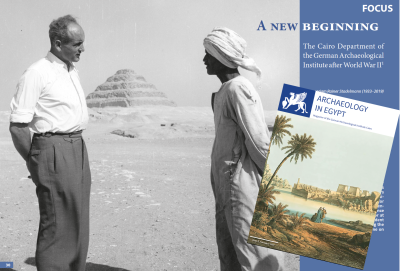 Last year, on the occasion of several anniversaries, the Cairo Department of the German Archaeological Institute published a special edition of its magazine "Archaeology in Egypt". This issue introduces the Institute’s 5-year research plan that addresses the topics settlement archaeology, communication in sacred spaces, as well as the cultural diversity and unity of Egypt. It also acknowledges the history of the Department with a special article by Susanne Voss about the reopening of the DAI Cairo after World War II.

The long-term excavations at the sites of Buto, Dahshur, and on Elephantine Island aid in the study of former settlement patterns and daily life of the people at that time. The formation of settlement areas within the regions of Aswan, the Fayum, and the north-western Nile Delta is also analysed on a macro-scale level, using methods of geoarchaeology and landscape archaeology.

Furthermore, studies concerning the Osiris cult at Abydos or the worship of king Sneferu at Dahshur deal with ritual space. Investigations into the development of tomb architecture and religious-funerary practices, undertaken by DAI projects at Thebes and the royal necropolis in Saqqara, make a crucial contribution towards the understanding of cultural forms of communication, as does the examination of epigraphic sources.

Finally, the various projects focussing on post-pharaonic periods in Egypt collectively aim to assess Egypt's perception of entity throughout times of sovereign and religious changes. These projects include studies on Hellenistic-Roman Egypt and papyrology in the Fayum, as well as on Christian-Muslim coexistence within the Coptic monasteries Deir el-Bakhît and Deir Anba Hadra, and the early Islamic cemetery in Aswan.