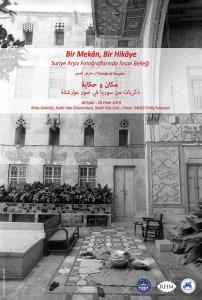 A Place and a Story: Memories of Syria in Archival Photos
Art : Sonstige

Photo Exhibition 18.09. – 26.10.2019 Khas Galerisi, Kadir Has Üniversitesi, Kadir Has Cad., Cibali, TR-34083 Fatih-İstanbul
“Bir Mekân, Bir Hikâye/مكان و حكاية” (a place and a story) are just two of many words that have the same meaning in both Arabic and Turkish. As such, these two words illustrate the close connection between the two cultures and neighbours. They were chosen as the title for this exhibition which aims to show Syria as the Syrians remember it by focusing on people’s memories and their relationships with cultural heritage. Syria is a country full of treasures and surprises. Similar to Turkey, it hosts one of the world’s most comprehensive and long-lasting cultural heritage records. However, as it is well known, recent years have witnessed difficult times and many painful losses. Fortunately, this is not the only thing that remains in the memories of the Syrian people.

The exhibition “Bir Mekân, Bir Hikâye/ مكان و حكاية” aims to raise awareness and knowledge about Syria and its cultural heritage. Organised within the framework of the Stewards of Cultural Heritage Project (SoCH) at the Istanbul Department of the German Archaeological Institute (DAI), the exhibition uses archival photos from the collections of the DAI, the Museum of Islamic Art in Berlin and the Max Freiherr von Oppenheim Foundation, as well as private collections. It is intended to show the importance of archival materials, especially in times of conflict, as they can play an essential role as a memory trigger and as a starting point for the implementation of many different projects to protect cultural heritage.

For this exhibition, people from different parts of Syria living in Turkey and elsewhere were interviewed. They were shown photographs and asked to talk about what they remembered. In doing so, the archival photographs, mostly documenting monumental structures and cultural heritage sites, were matched with the testimonies of daily lives. By combining the monuments and sites with people’s stories, the exhibition aims to show the devastating impact of the conflicts in Syria on both human life and cultural heritage.

SoCH is a project by the Istanbul Department of the German Archaeological Institute (DAI), which aims to help safeguard Syrian cultural heritage through capacity building of Syrian heritage specialists who are currently residing in Turkey. The project is a part of the "Stunde Null – A Future for the Time after the Crisis"-project under the umbrella of the Archaeological Heritage Network. SoCH was initiated in 2016 and has been supported by the German Federal Foreign Office and the Gerda Henkel Foundation. Most of the photos used in the exhibition were digitized and archived within the Syrian Heritage Archives Project (SHAP), launched in 2013 by the DAI and the Museum of Islamic Art in Berlin.