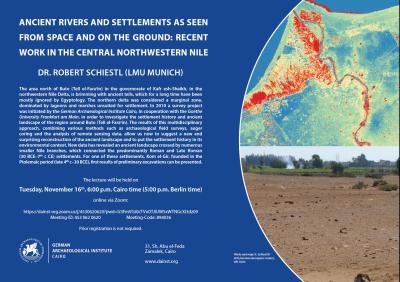 Dr. Robert Schiestl (LMU Munich) - Ancient Rivers and Settlements as seen from Space and on the Ground: Recent Work in the Central Northwestern Nile

The area north of Buto (Tell el-Faracin) in the governorate of Kafr esh-Sheikh, in the northwestern Nile Delta, is brimming with ancient tells, which for a long time have been mostly ignored by Egyptology. The northern delta was considered a marginal zone, dominated by lagoons and marshes unsuited for settlement. In 2010 a survey project was initiated by the German Archaeological Institute Cairo, in cooperation with the Goethe University Frankfurt am Main, in order to investigate the settlement history and ancient landscape of the region around Buto (Tell el-Faracin). The results of this multidisciplinary approach, combining various methods such as archaeological field surveys, auger coring and the analysis of remote sensing data, allow us now to suggest a new and surprising reconstruction of the ancient landscape and to put the settlement history in its environmental context. New data has revealed an ancient landscape crossed by numerous smaller Nile branches, which connected the predominantly Roman and Late Roman (30 BCE–7th c CE) settlements. For one of these settlements, Kom el-Gir, founded in the Ptolemaic period (late 4th c–30 BCE), first results of preliminary excavations can be presented.