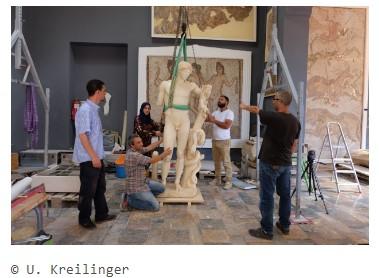 "The reassembly of the sculpture collection of the National Museum of Cherchell (Algeria)" by Ulla Kreilinger (Friedrich-Alexander-Universität Erlangen-Nürnberg) and Ortwin Dally (Deutsches Archäologisches Institut Rom)
The ancient city of Caesarea Mauretaniae, modern Cherchell in Algeria, had its heyday during the reign of the Roman emperors Augustus and Tiberius. In only 60 years, impressive buildings were erected here and high-quality sculptures were produced. The city hosted a very vivid cultural scene unparalleled in the world at that time and in clear competition with Rome. Soon after, Caesarea became the capital of the newly founded Roman province of Mauretania Caesariensis. The lecture will focus on the sculptures in the Musée Public National de Cherchell, which were restored and reorganised over several years. In charge of this project linked with the Rome Department of the German Archaeological Institute were the two speakers; the project was financed by the Federal Foreign Office.

The lecture will be held online on zoom. If you'd like to attend, please register at least 3 days before the lecture by sending an email to: romanislam@uni-hamburg.de